The Impossible Dead by Ian Rankin and The Fleet Street Murders by Charles Finch. Great and good read respectively. I'm just sorry that so many people have to be (fictionally) murdered for my reading enjoyment.

Here's what I made: 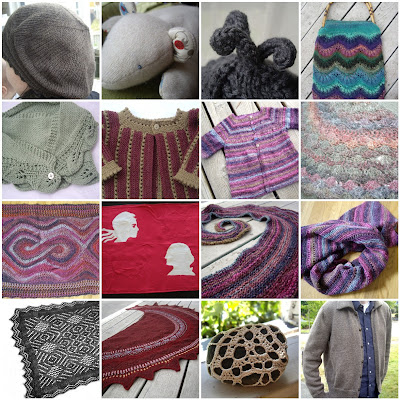 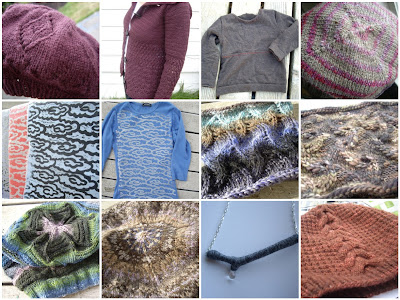 Twenty-eight completed projects, of which 18 were knit, four crochet, and three sewing; and I managed some jewellery and printmaking this year.

I made seven hats, nine shawls/cowls/scarves, two adult garments (that's twice as many as last year!) and six baby/child garments. Thirteen things were for me (although I subsequently gave a few away), four things for my children, two for my husband, seven items were given away and three were for good causes. Stash/recycle content was included in ten items (I do wish it had been more).

How did I go? I didn't actually manage to read at least a book per month although I did manage to read 18 books altogether. I dealt with those terribly old knitting projects by: frogging, finishing and ignoring respectively. The quilt got pinned together ready for quilting and Tim got his first garment. Not nearly as much was made from stash or recycled materials as I would have liked but there's always 2012 ...
Posted by Amelia at 15:43 1 comment:

You know, like those magazines that publish a December/January issue ...

Hospital: Man, Woman, Birth, Death, Infinity, Plus Red Tape, Bad Behavior, Money, God, and Diversity on Steroids by Julie Salamon - ok, so I didn't actually read a book in November, this one dragged on into December. And yeah, it dragged. It was an impulse grab off the shelf and once I'd started of course I had to finish and ... whatever. I need to avoid books written by journalists.

And then within a matter of days I polished off The Ballad of Frankie Silver by Sharyn McCrumb. I have really been enjoying these Ballad novels, this one was good but I think that She Walks These Hills has been my favourite so far.
Posted by Amelia at 15:28 No comments: Oh dear, time has really gotten away from me. What started as just a few days break has stretched out to a month. And it's not for lack of something to say or show, rather the opposite and a very busy brain.

Just to start, I must address:

- November and December reading
- a 2011 overview (what. you say everyone did that three weeks ago?)
- a 2012 manifesto
- knitting updates, there is always knitting here
Posted by Amelia at 15:08 No comments: 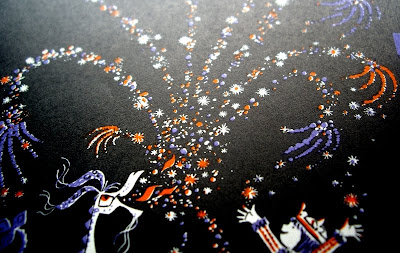 We, of course, were in bed and asleep way before any fireworks. These ones are from a 1961 publication, The Dragon Who Liked to Spit Fire by Judy Varga. Awesome illustrations, entirely in black and white, purple and orange.
Posted by Amelia at 04:21 No comments: