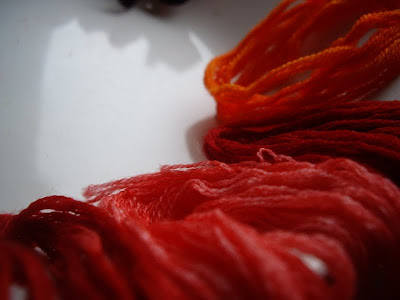 I've been curious lately about dyeing yarn with Kool-Aid so I purchased a few sachets and pottered around in the kitchen last night.

Except for the grape which produces quite a dark purple, all of the flavours that I managed to find produced a red of sorts. I'll keep searching for some blues and greens and then see if I can create some semi-solids. Why? Well, just for the fun of it and for that extra sense of being able to create things just the way I want them to be.
Posted by Amelia at 11:06 1 comment: 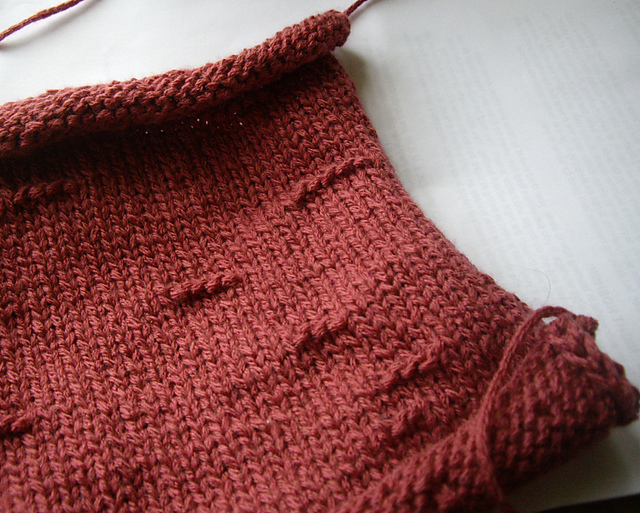 Thanksgiving is the quintessential American holiday. The day before is the busiest travel day of the year in the US as everyone wants to be 'home for the holidays'. It is of course not a holiday that I grew up with, but any occasion to think about all that I have and enjoy is also time to think about those who do not.

I've recently knit a square for the Schuyler Blanket Project and another for women recovering from fistula surgery in Uganda. Both were knit from stash yarn - Louisa Harding Kashmir Aran - the one above is about 11 inches square, with some random reverse stocking stitch ridges.
Posted by Amelia at 18:23 No comments:

Labels: made by me, needle + yarn

I love the cover of this book - graphic, witty, cheeky. Hmm, maybe should have stopped there with it. Dana Thomas is a journalist and I never have much luck with books written by journalists. It's like one neverending magazine article; all reporting, facts, figures and no central argument.

After some 300 pages the book finally gets to its crux:

luxury companies have gone mass and along the way forgotten their original mission, which was to provide the rich with truly exceptional products. (p331)

And what of it? That the mass market is now being ripped off by inferior products, manufactured sometimes under dismal circumstances, marketed on their historical prestige? Or that the rich are now bereft of truly exceptional, exclusive and expensive products on which to spend their millions? Really, these are the questions that are present throughout, unwritten and unaddressed, and that is the real failure of this book.

Further, in the last few chapters there were so many editing mistakes - missing particles, words repeated. Am I the only person who notices such things? Just to harp on it again, "And so to bed" was an exhibition at Elizabeth Bay House in Sydney that really changed my life. I was so inspired by the bedcoverings - knitted, embroidered, quilted - that I started to pursue these things in my own life. One of my great aspirations is to knit a counterpane (lovely name for a bedspread) out of very fine white cotton in one of the old-fashioned patterns.

In the meantime I have contented myself with the Counterpane Carpet Bag from Melanie Falick's Hand Knit Holidays: knitting year-round for Christmas, Hanukkah and Winter Solstice. Following the lead of several other Ravellers, I am doing it in Noro Kureyon - the scalloped effect of the stitch pattern shows of the self-striping yarn to great advantage. In fact, I would say that this yarn and pattern are made for each other.

I have finished one side of the bag and chosen the handles (from stash - hooray!). One side to go and then seaming and sewing a lining.
Posted by Amelia at 13:36 1 comment: 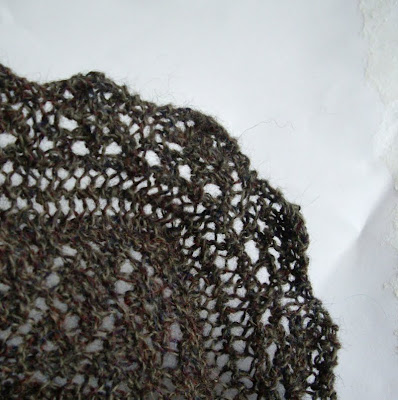 So, knitted-on edgings - this is the first time that I have knit something using this construction method. First you knit a central panel using a provisional cast-on and leaving the stitches of the final row live (that is, don't cast off). The first stitch of each row is a slip stitch so the edge of the central panel has half as many stitches as rows (one slip stitch counts for two rows).

The knitted-on edging also has a provisional cast-on. The first stitch of the odd rows (knitting from the panel out to the edge) is a slip stitch and the last stitch of the even rows (knitting from the edge back towards the panel) is knit together with either one of those slip stitches from the edge or a live stitch. Have I lost you? It's ok if I have, because the purpose of this explanation is to let you know that turning the corner is even more complicated.

There are excellent instructions in the book but I think that they are for a centre panel of eight repeats, and I did nine. That's an extra 36 rows which is not a multiple of 14 (the number of rows in the edging). So, when I got to the corner I was in a slightly different place to the instructions. Oh well. I fudged it a bit and got the corner repeat in basically the right place but it is not sitting particularly flat. Thank goodness for the stretchiness of knitting, and of lace knitting particularly, as I think that it will block out fine.

But not quite over it; anyway, not yet. 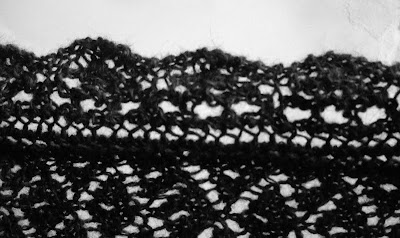 I have been working diligently on the edging of my knitted veil. I had mentally divided the work up into two-thirds for the centre panel and one-third for the edging. Thankfully, I don't think that this division actually reflects the physical effort required and the edging is progressing along rather quickly and easily.

So smoothly in fact that the possibility of completion is in sight and I feel that I can rest up a bit and leave it until later. Unh-oh - in this way does many an unfinished object become an unidentified mass of yarn at the back of the cupboard. Must. press. on.
Posted by Amelia at 03:37 1 comment: 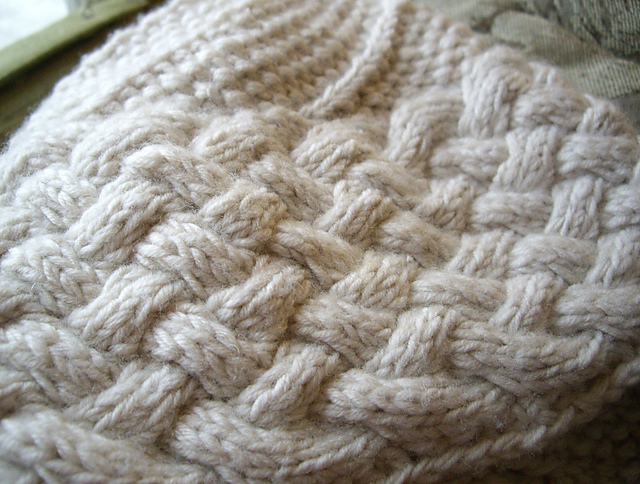 I was never a Brownie. Not sure why; it was just one of those things that other people did. And I didn't like the outfits which were at the time, unh, brown.

The Vital Statistics
Pattern: Brownie by Woolly Wormhead from the Twisted Woolly Toppers ebook.
Yarn: 100 per cent wool, recycled from a Country Road cardigan that I bought at an op shop in Australia and lugged across the Pacific (an all too familiar tale). And this wool is beautiful - it is so soft and silky, perfect for a baby's head.
Needle: 4.5mm
Size: smallest size.
Stash/recycle content: recycled yarn - hooray!
Start to finish: 27 October to 7 November 2010.

Comments: This is a great hat pattern, probably intermediate in its construction complexity. I was casting around on Ravelry and as soon as I saw it, I knew that I wanted to make it. I love the structure - a band of braid grafted together to form a loop, then pick up stitches for the crown and pick up stitches for the ear flaps. Oh yes, I grafted. Not my favourite knitting skill but much easier with this yarn than with sock yarn.

I didn't swatch and it's always a bit difficult with recycled yarn to know whether you are knitting it at an appropriate gauge, but I think that this came out a little smaller than intended. It fits baby b perfectly snugly right now, and I hope for the rest of the winter. That cable is really dense and before I blocked it (vigorously) it stood up by itself. The blocking gave it some drape but still not a lot. Again, not sure if this is a feature of the cabled fabric or a gauge issue. You could also substitute a different cable pattern as long as it fit the stitch and row count.

One issue is that there are lots of ends to weave in, perhaps too many. Should I knit it again (and I would like to), I'd try to be a bit more judicious about breaking the yarn and then attaching it again at the centre back. I think that when you finish the second ear flap that you could just cast off from there.

Verdict: Great pattern and also a great finished piece. This hat is very cute. I'd like to try it again in Cascade 220 (the yarn called for) to see how it turns out. And bonus, then there would be another hat.
Posted by Amelia at 08:02 1 comment:

Labels: eco, made by me, needle + yarn, op shopping

It was really a big reading month for me. I seem to have gone from barely reading to remembering how much I love to read and getting in a bit over my head.

Deluxe: how luxury lost its luster by Dana Thomas - I actually read this over the course of a couple of months but finished it in October. It deserves its own post shortly.

All Together Dead and From Dead to Worse by Charlaine Harris - more Sookie, more happy ...

Shaker Run by Karen Harper - There was a copy of this at our vacation rental in Georgia but I didn't read it until we got back. I borrowed it from the library in large print which took some getting used to. A thin suspense tale with rudimentary characterisation. Maybe ok if you're actually on vacation.

Third Eye - by Lois Duncan - Last (and perhaps least), one of the books that I read as a teenager and recently discovered the name of. I was apprehensive about returning to these books that I would be disappointed by the lack of sophistication. And I was; but even more so by some of the clumsy concepts in it. Won't be recommending this one to little miss bear.

We're big on mermaids in this house. Or at least we are trying to be as an antidote to the whole Disney princesses cabal. And so it came to be that little miss bear's Hallowe'en costume this year was to be a mermaid. I took her ratty Ariel costume that I purchased at the Japanese Baptist Church rummage sale for a couple of dollars and bedecked it with beaded and sequinned fabric cut from a 1980s disco outfit (that's what the tag claimed it be at the recycled clothing store). 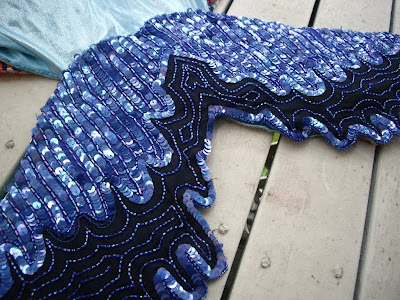 It was absolutely serendipitous that the lines on the blouse perfectly echoed the shape of a mermaid's tail. I used some quilted fabric that I had lurking in my stash from a thrift store purchase many moon's ago as reinforcement and also as a lining to make the outfit warmer to wear. And I sewed all of this by hand. 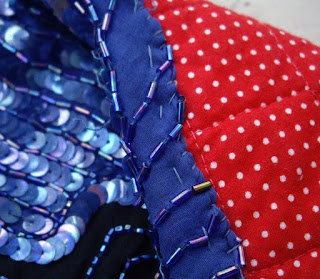 Then at about six o'clock yesterday evening, little miss bear decided to wear her fairy wings and be a fairy, just like last year. There was much effort at coercion but no, she had made up her mind. So we went to the nearby (fabulously outrageous) trick-or-treat locale, had a wonderful time and all lived happily ever after.

ps. Some weeks ago at the playground I overheard a couple of girls negotiating how to play vampire mermaids; how cool would that be?

pps. I'm hoping that the costume will still fit her next year. Maybe by that time she'll be into vampires as well ...
Posted by Amelia at 06:19 1 comment:

ghost of hallowe'en past ... 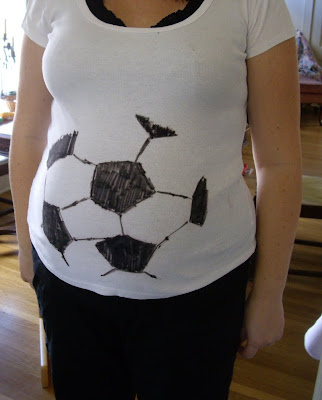 I was about seven and a half months pregnant at Hallowe'en last year and fashioned this last-minute costume with an old white t-shirt and a black marker (it's here modelled by my currently pregnant friend Nathalie).

You know, the whole thing about looking as though you have a basketball up your t-shirt. Well, I went for soccer ball instead (I only had a black marker).
Posted by Amelia at 06:19 1 comment: