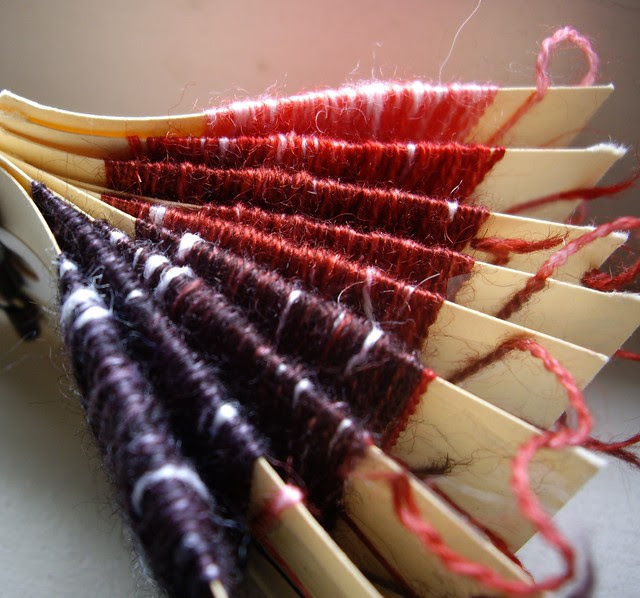 I've done some more Kool Aid dyeing recently. I really like the Les Miserables shawl by Cynthia Parker (more felting, I must be careful) but am not particularly taken with any of the Classic Elite Yarns Silky Alpaca Lace colourways. Ah, typical DIY-ster, I just think that I'll dye some up myself. I bought a ball of the (2401 - white) and a few packets of Kool Aid - cherry, black cherry, pink lemonade and grape - and set about testing them out, both by themselves and in combination with each other. 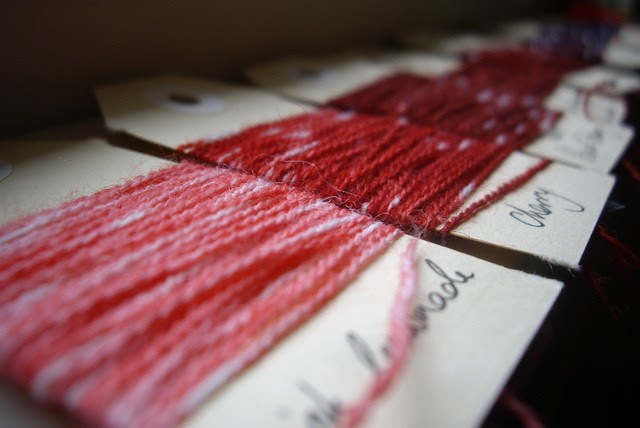 I didn't really achieve any effect that I had in mind but it was fun to do (and miss bear helped me, she thought it was fun too but couldn't understand why I wouldn't let her drink the stuff; really, when you see how it can dye yarn, would you let it anywhere near your innards?). And the white flashes where I had bound up the little yarn bundles spoil the effect somewhat too.

Anyway, I'm planning to get my hands on some blue and then overdye that with grape (and perhaps the other way around too) to see if I can achieve some sort of dusty Parisian purple. (Speaking of which, if you happen to be visiting Paris, don't miss Le Musée des Égouts de Paris, yes, the Paris Sewer Museum. Perhaps one of the city's more bizarre museums but really interesting, and not particularly smelly. Dank, but not smelly.)
Posted by Amelia at 12:44 1 comment: 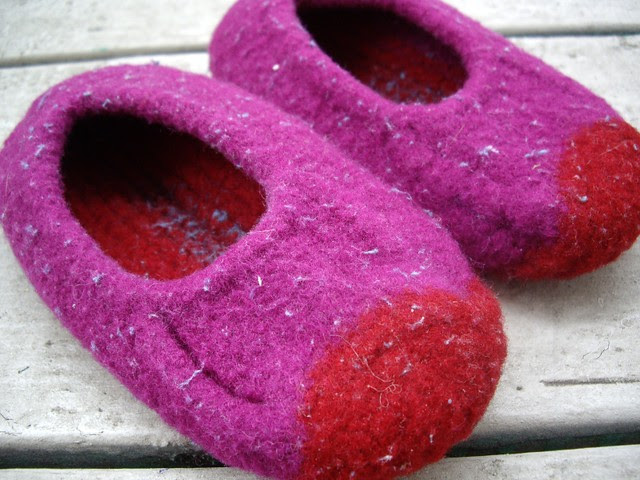 The Vital StatisticsPattern: Duffers - revisited by Mindie Tallack.Size: I knit size US 3/EUR 33 but, unh, felted them until they fit my friend's three-year old (unh, not on purpose).
Yarn:
Cascade 220 Wool in 7803 'magenta' (0.45 skeins) and 9404 'ruby' (0.5 skeins); 100 per cent wool.Needles: I used two pairs of 8mm circulars to knit these.Start to finish: 16 January to 19 January 2012.Stash/recycle content: Nope, bought the yarn for this purpose.
Comments:
I initially knit these slippers as a gift for a six-year old's birthday. The US 3 size would have been way too big so I felted them enthusiastically. Too enthusiastically. My sizing problems were complicated a bit by the fact that the largest size in the Little Duffers (children's version) is a US 11/EUR 28.5 whereas the smallest size in Duffers - revisited is the US 3/EUR 33. This leaves quite a size gap and better judgement on the felting than I had anticipated.

I am a bit concerned by how much the back of the slipper curves in but that may have been a result of the over-felting. Also, I do not recommend adding towels to the washing machine for friction when felting as you end up with the memory of them scattered all over the felted item in the form of unsightly little specks of cotton.
Verdict: Will try again. 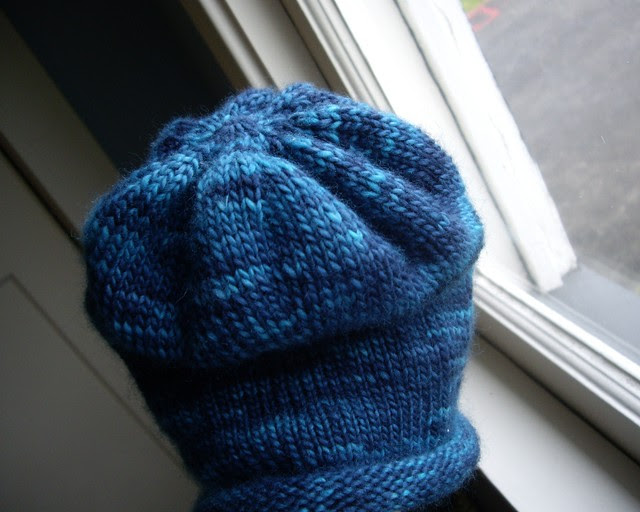 Ok, it's actually the 8th of April today, but I did start this post way back in March, as with the next few posts to follow. I just never got around to finishi...

The Vital StatisticsPattern: Felicity by Wanett Clyde, available for free.Yarn: madelinetosh tosh merino in colourway 'baltic'; 100 per cent merion; 0.54 skeins.Needles: 3.75mm and 4.5mm.Start to finish: 29 February to 4 March 2012.Stash/recycle content: Yes, from stash.Comments: Oops, I didn’t read pattern carefully and neglected to purl the first row so this hat has a rolled edge instead. I knit a little more than 5.5 inches in length to make up for this. Nevertheless, and this may have to do with the yarn and needle sizes that I used, this hat is small, in circumference and volume. Verdict: I knit this for a friend who insisted that she has a very small head but still, I think that the hat is too small. She also insists that it is just dandy but she's a kind friend.... Good straightforward pattern, would really have liked to achieve the intended slouch.

Labels: felicity, made by me, needle + yarn 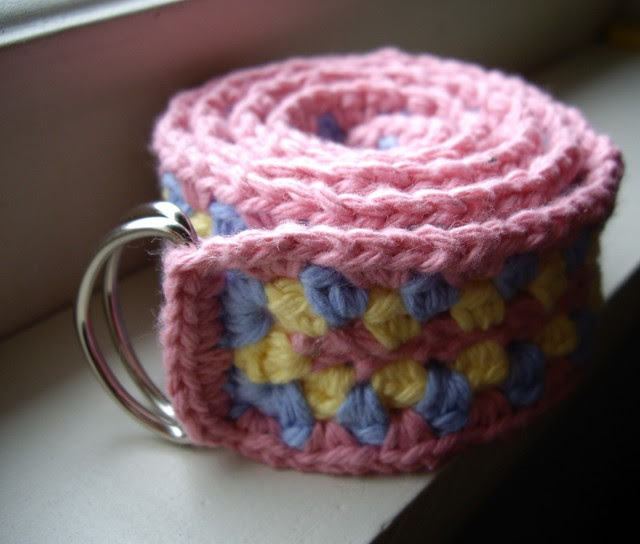 The Vital StatisticsPattern: Granny Straps by Alice Merlino (available free online).Size: I made a foundation chain of 111 stitches.Yarn: Lily Sugar'n Cream in shades 18083 - cornflower, 18046 - rose pink and 1109 - yellow (not my choice of colours - this was a birthday present for miss bear's friend and the colour choices were hers).Hook: 4mm.Start to finish: 17 to 18 February 2012 - a quick hook!
Comments: This pattern is for a crochet strap but I decided to use it as a belt by adding two d-rings at one end. My strap/belt is one round wider than the pattern. I attached the d-rings by making the double crochets (British terms) over the flat side of the rings. I chose d-rings because I hoped that would make for easy dressing but the belt is quite bulky, perhaps too bulky for this sort of closure. If I do another one I'll use a regular belt buckle.Verdict: Very pleased to be giving handmade gifts.
Posted by Amelia at 03:33 1 comment:

Labels: granny straps, hook + yarn, made by me 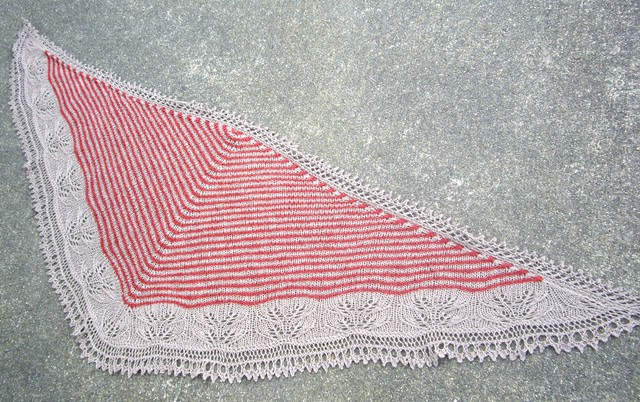 The Vital StatisticsPattern: Andrea's Shawl by Kirsten Kapur of Through the LoopsSize: Large.Yarn: Elsebeth Lavold Silky Wool in shade 50 'Sandstone' (1.6 skeins) and 24 'Claret' (0.6 skeins).Needles: 4.5mm.Start to finish: 25 January to 10 February 2012. But then it took me a month to get around to blocking it ...Stash/recycle content: Yes! I've had this in the cupboard for ages. 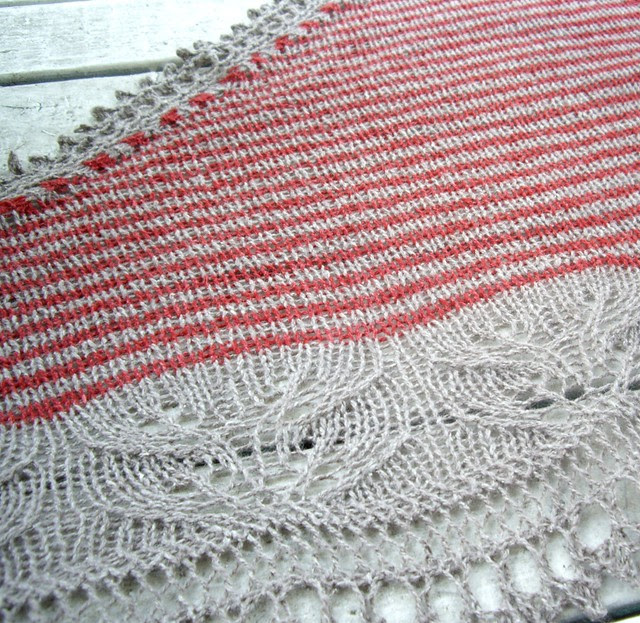 Comments: I have wanted to knit this for a long time, ever since it was released I think. What was holding me back was its triangular shape which I'm not so keen on. I ended up making modifications to achieve a shallower triangle:

I did end up with a rather odd, diamond-shaped shawl but that blocked out well. As did all of those sweet little points on the lace edging - soooo many pins.

Verdict: It's big enough! This is a common complaint I noticed on ravelry about this shawl, that it's not large enough. So I can confirm, the largest size in dk-weight yarn is large enough. I really liked knitting with this yarn. The finished shawl has a lot of drape, kind of making the triangular shawl issue a non-issue. I even received a compliment from the hipster guy behind the counter at Molly Moon's, telling me that he really liked the 'doily edging' (and that he had crocheted the beanie that he was wearing).

Labels: andrea's shawl, made by me, needle + yarn 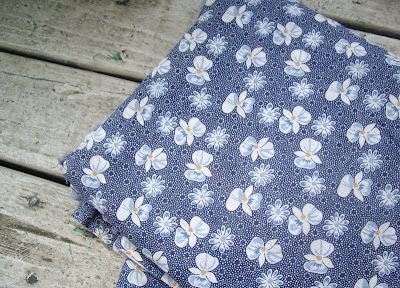 Five or so yards of a light cotton fabric. I can't decide whether this is vintage and there's no information on the selvedge and some damage in places but that doesn't really tell anything. The print looks very 1930s to me. Dress? Blouse? Cupboard stuffer? (Capitol Hill Value Village, $5). 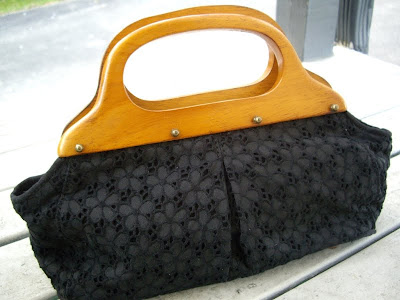 Super bag - solid wooden handles, silk eyelet and cotton lining with inner pockets and leather trim. I love the handle and it's the perfect size for a knitting project. Again a vintage look but actually J. Crew (U-District Goodwill, $10).

This is not really what I had in mind with my reading goals but oh well, this is what I managed this month. (I actually managed to let my hold on V is for Vengeance expire [shudder] and couldn't bring myself to read anything else all month).

Found, Free and Flea: creating collections from vintage treasures by Tereasa Surratt - ah, to buy a disused summer camp and find it full of vintage treasures and to then supplement with the fruits of endless thrifting, flea market shopping and side-o'-the-road finds. Ah, to be able to afford to buy a disused summer camp in the first place (need to be an advertising executive at Ogilvy & Mather).

And to have the luxury of time to do all of that thrifting and flea market shopping and stopping at the side of the road (where do you get free time if you are an ad exec at Ogilvy & Mather?). The only thing that these people don't seem to have is kids - hmmm .... (although there is a cryptic note at the end welcoming Charlie and they can't wait to meet him/her. Maybe a baby, maybe a puppy).

Anyway, not to be churlish (ok, too late) this is a great book to look at and fun to read with a good central idea about turning any vintage item into a collection by acquiring more, similar items and lots of photos to prove it. The central approach of only acquiring said items by means of 'found, free or flea' is a welcome ethos. 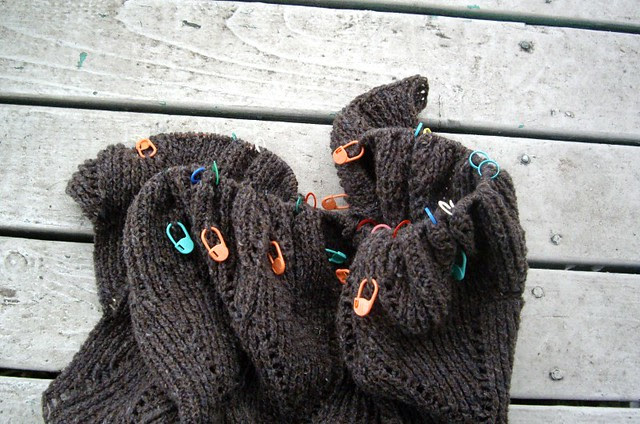 Long nights. Long long nights of settling and resettling, one child waking the other child, more resettling. But children are no longer sleeping with mummy and daddy, they are sleeping in their own beds all night long (even if mummy isn't, sleeping that is). Playing the long game, counting on the pay off. 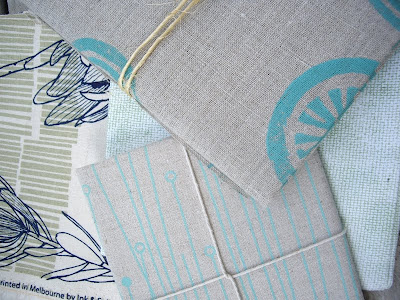 Most remiss of me to take so long to show these wonderful fabrics that I received in the hand-printed fabric swap. Amazing that I got all blue/greens ...

Clockwise from the top is fabric from: Estelle of Fortune Favours the Thrifty, Kirsty of kootoyoo, Tania of myrtle & eunice and Tegan of Ink & Spindle. 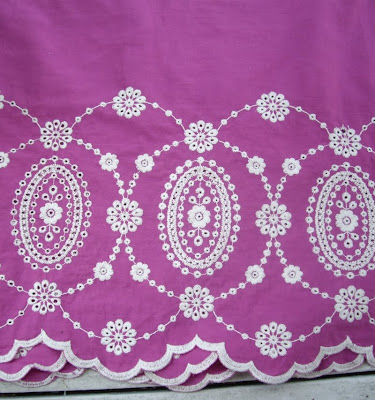 I can't wait to get my head into sewing mode and think about how I could use these fabrics to sew some things for my littlies (or for me; given the fat quarter size I automatically thought children but I can see a zip-up pouch or two as well). I'm thinking yokes on dresses or a floppy sunhat much like Di has made.

I've also done some successful commercial fabric shopping recently. About six months ago I absolutely fell in love with an Isabel Marant blouse that featured quite amazing eyelet lace and I have been looking for something similar ever since. Here at right is the very best that I have found, in fact the only close thing that I have found. The difficulty has been in locating something with both a substantial deep and decorative eyelet lace portion and an expanse of plain fabric. This one that I bought at Stitches has both. Not so keen on the contrast embroidery thread but really, not even Mood had anything like this. I'll just make it work.