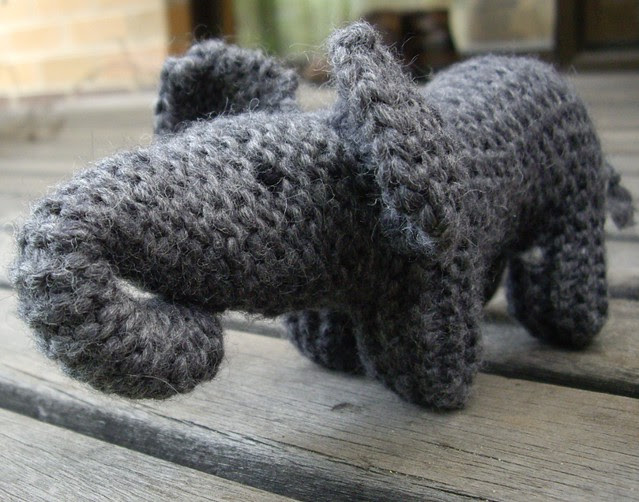 I love the name Pachelbel but it's not one you get to use often, unless you're a music buff naming a toy pachiderm.

The Vital Statistics
Pattern: Elephant by Bonnie Gosse and Jill Allerton from the great first knitting book, aptly named A First Book of Knitting for Children.
Size: The pattern only provides for one size so it depends on what weight yarn you use.
Yarn: Moda Vera Husky (100 per cent baby alpaca) in colourway 5 'dark grey'; 1 skein.
Needles: It's a bulky yarn but I knit it with 2.75mm needles to get a really solid fabric so that the stuffing wouldn't show or leak through. 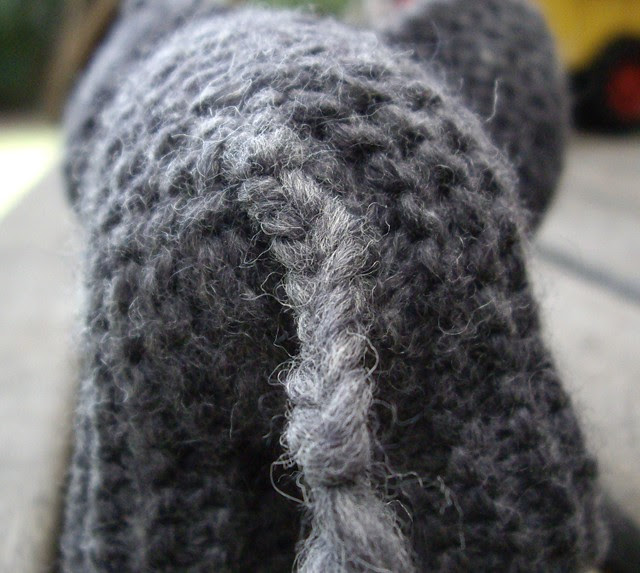 Stash/recycle content: Alas, no. Oh actually, a tiny little bit. The embroidery wool for the eyes was bought at the op shop!

Comments: I actually knit two elephants, this baby one and a larger one using two strands at once and a 4mm needle. Unfortunately, I was so excited with the finished product that I gave it away to the happy recipient without even taking a photo. I'll try to get one at a later date.

I knit only 12 rows for head and decreased 1 st at beg of the last 2 rows for the ears. I then sewed the ears on with tail of the cast on, starting at the side of the body and working up toward the crown of the head. Then I used from the cast off end to gather up the side of the ear. Both elephants were stuffed with wool roving.

Verdict: Adorable, but certainly hard on the hands to knit.
Posted by Amelia at 00:32

Labels: elephant, made by me, needle + yarn, op shopping