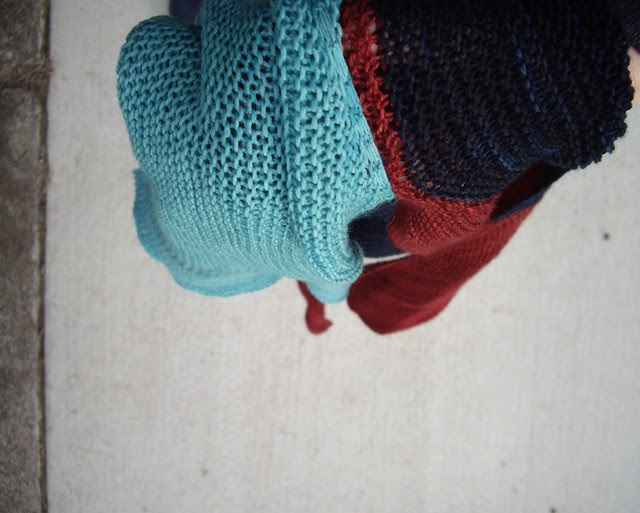 The Vital Statistics
Pattern: Eris by Lisa Mutch of Northbound Knitting.
Size: There's only one size in the pattern but it would be easily customisable.
Yarn: Wollmeise "Pure" 100% Merino Superwash in the colours 'Admiral' (dark blue; 0.28 skeins) and a wd 'Oooohm' (the turquoise; 0.33 skeins) and madelinetosh tosh sock in 'tart' (red; 0.56 skeins).
Needles: 4mm 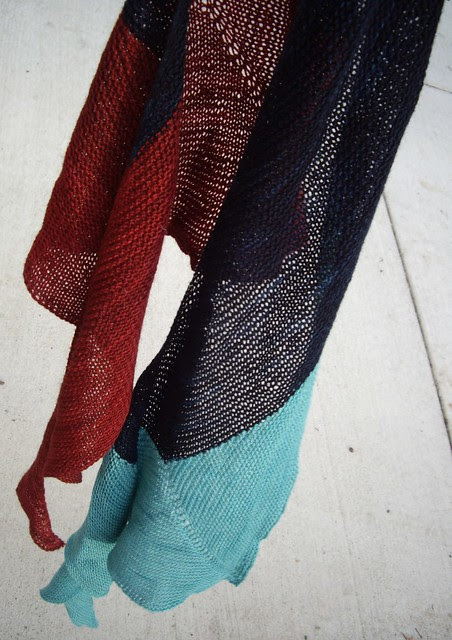 Start to finish: 19 November 2012 to 11 March 2013. It shouldn't really have taken that long but I got two-thirds of the way through and then it sat for a while. Quite a while.
Stash/recycle content: nope.

Comments: I don't often have trouble reading knitting patterns but this one gave me some grief. What does this mean to you?: "k to 1 st past last wrapped st". To me it means knit up to but not including the stitch after the wrapped stitch. But, I can sort of see how it might mean to knit until the first stitch past the wrapped stitch. No, not really. Anyway, the grief was indeed that I interpreted it as the former and found out many rows later that it meant the latter. Rip rip rip. 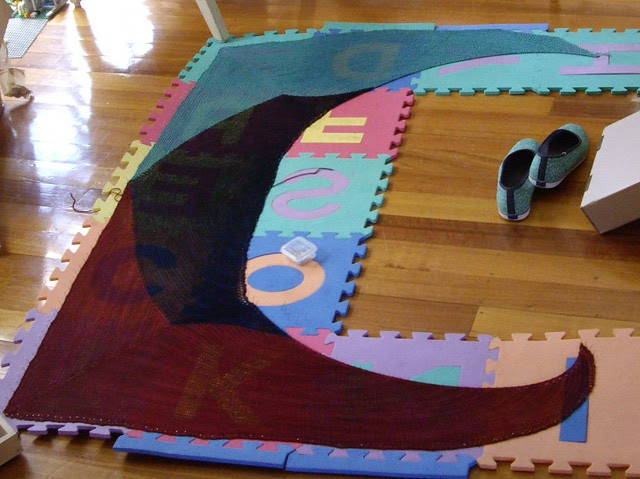 There's also an error (in my opinion) in row 1 of section C. It should read k8 instead of k6, otherwise the numbers just don't add up.

Also, I picked up the wrapped stitches along the change from section 1 to section 2, as it helped to preserve a smooth line.

This was my first time knitting with Wollmeise. I had a bit of a panic attack upon returning to Australia that I would never be able to find gourmet yarn again. Never fear, turns out that quite a few local ravellers are selling theirs off and I now own quite a few skeins. The Wollmeise colours are fantastic but I found the yarn itself to be a bit splitty.

Verdict: Once the pattern is clear to you (!) this is very easy, albeit slightly monotonous, knitting. The result is a really great shape, best seen in the shot of it blocking. I think often of Di's comment about my knitting choices, that I knit for texture as opposed to shape (Di, that's going to stay with me forever, probably because it was so apposite). This knit went quite some way to showing me why - textural knitting is exciting, absorbing, engaging, yarn-over, knit-two-together, pass-the-slipped-stitch-over knitting. 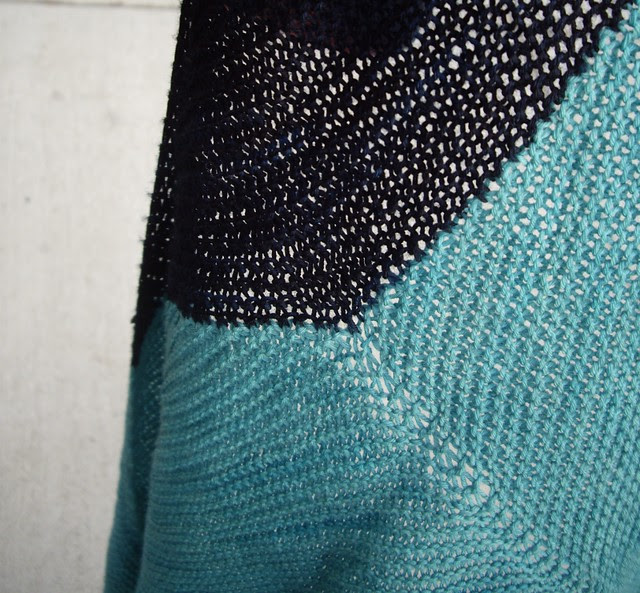 Labels: eris, made by me, needle + yarn

While incredibly beautiful, it is easy to see it was an epic knit. You are well and truly deserving of a break from garter stitch!

I love the effect of garter stitch, and your choice of colours is inspired.