So back to those snipped-off buttons: why the (perceived) disdain from an older generation that I am doing by choice something that they perhaps once had to do by necessity? It seems that at one point brand new and shiny became cheap and accessible and also preferable.

I had never much thought about economics as anything much beyond "the economy" until I did that Health Economics subjects. And “the economy” has always been something monolithic that I am all too aware that I don't understand well and am therefore hesitant to write much about. But with wikipedia everyone's an expert so here goes: economics is "the social science that analyzes the production, distribution, and consumption of goods and services." I like to think of it in terms of flow, the flow of money in and out, the flow of goods production and disposal. I also like to think of it as a closed system, to recognise the finite nature of our resources.

And I do think that there is a finite number of zippers in our world and in our future; to throw away a worn out garment with a perfectly serviceable zipper still attached, to let it rot and rust, is unconscionable. 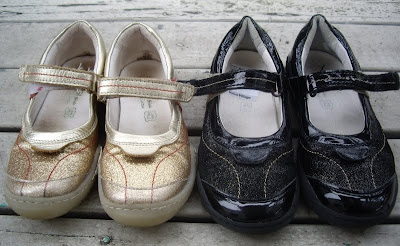 I’m sure that I have written before about the amazing mother lode of goods that are available at thrift stores here in the US (well, here in the Seattle area certainly but I’ve visited some pretty huge ones in San Francisco, Chicago, Salt Lake City and Georgia now too). I often wonder when I am there, what if everything here in this store were utilised straight away, if everything reusable were indeed reused, instead of something new being manufactured and purchased?

Please consider the Primigi girls shoes above. One pair was purchased online for $60.00 and has been worn for a couple of weeks. The other pair is the next size up and was purchased at Value Village for $3.99. They are in roughly equivalent condition. That's $56.00 to spend on ... ah, groceries?
Posted by Amelia at 09:33