But not down the drain (phew!).

This is my Attabi Wrap/Cowl/Infinity Loop having a little soak before blocking (so to speak): 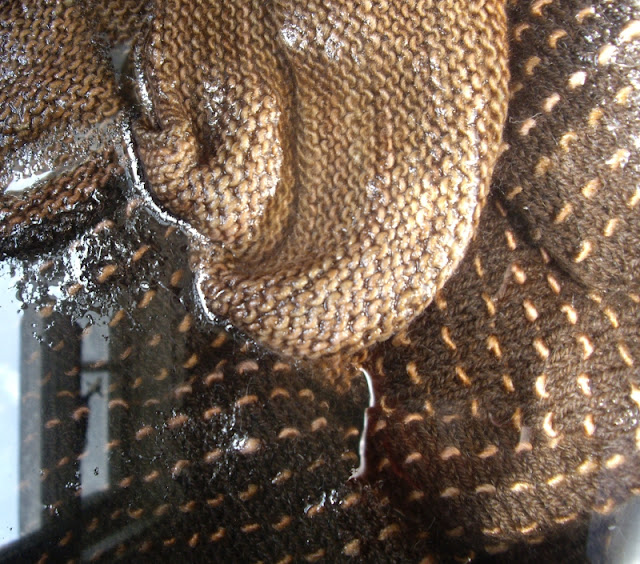 And here it is 'blocking', that is, stretching out:

This is how I have had good results blocking a long cowl before - instead of lying it flat and risking creases, I block them in the round:

Step 1 - pad a broom with a couple of towels.
Step 2 - loop cowl over padding and suspend broom between two chairs, or, if the cowl is really long as was the case here, between two lines on the clothesline.
Step 3 - weight it down with a heavy book resting on a bundled up towel.

I have used the most recent Haruki Murakami here - 1Q84 - and I fear that this is the only use that I will have for it. After having waited months for my turn to read it from the library, I don't think there is any way I could get through it in the allotted three-week time period.

Anyway, there is a significant difference in stretch factor between the i-cord cast-off edge and the rest of the cowl, so I concentrated the not insignificant weight of Murakami there. I may use the woven floats to tighten the opposite edge up a bit, or not - will try it on first to see how it sits.
Posted by Amelia at 06:46