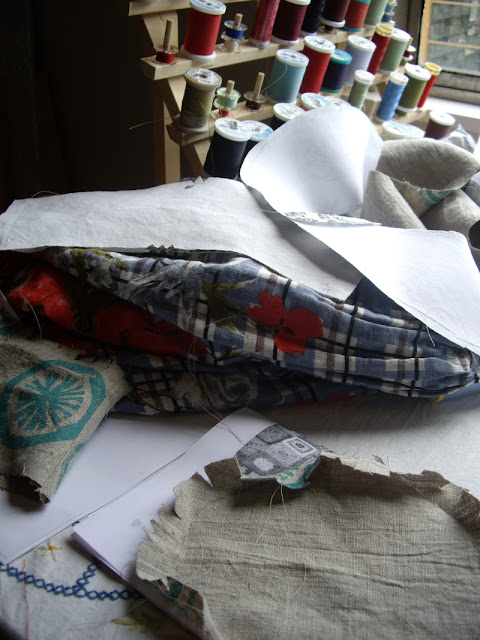 It's true, it's not the stork. I'm very aware that finished products often just show up in this space with no previous mention of the idea or the process. (Ah, I'm also aware though of many ideas and a bit of process that never end up as finished products but that's a whole other story ...) Thing is, I really would like to show more work in progress, so here goes:

Above - a snapshot of the work space directly in front of and to the left of my sewing machine. A total mess, true to form. Bottom right is the crown of the Oliver + S bucket hat, recently removed from the sides (at far left) because apparently I still cannot sew an half-inch seam. This pattern is available as a free download by the way - bonus. The fabric is by Estelle of Fortune Favours the Thrifty and I received it in the handprinted fabric swap. The piece was just the right size to cut out the hat pattern pieces and then the sides a second time because I botched the first ones up.

Under the crown is a printout of the Babette crochet pattern, yep, just lying around. I have almost finished my Babette! All of the seaming is complete except for one of the 12-round motifs which I want to redo because I didn't like the way the colour combination came out. Then, a lot of ends to weave in and a border.

Centre of the picture is my new Odille skirt, a linen/rayon blend with a wonderful print - blue and white check with red flowers and birds. I bought it on sale at a consignment store and am in the process of making it fit me. I was in the store and saw this skirt, a US size 6. I then shopped around, tried a few things on and could not get this skirt off my mind. So I bought it. I'm a US10. So I have taken off the waistband, let some of the gathers out, added a couple of panels to the lining, cut a new waistband, interfaced it and there it sits.

And there on top of the skirt lies the interfaced brim lining for the hat. I'm using some black and white toile de Jouy that I have had for years. Would you believe that this brim and the waistband for the skirt were the first things I have ever used interfacing on? I had some iron-on interfacing in the cupboard; it had been there for so long that I was concerned that the adhesive might have decayed but no, stuck well.
Posted by Amelia at 12:56

Hi Amelia, just came across your blog when searching for images of Karl Blossfeldt.... love your knitting! Cheers, tractorgirl