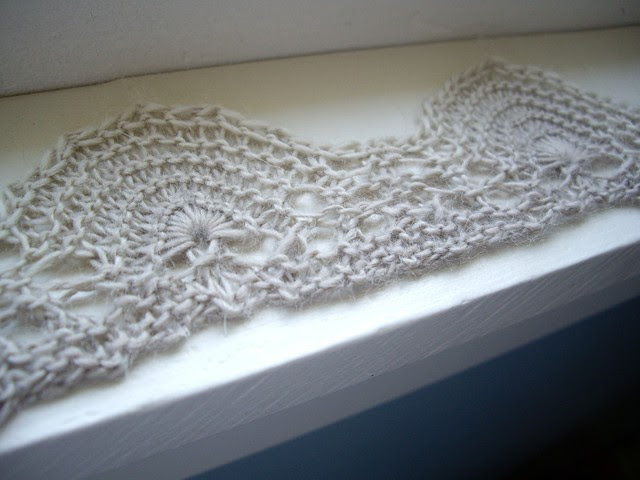 ... and cockleshells! I do love Kate Davies' Betty Mouatt Cowl (from textisles issue 2) and have had several different plans to knit it since the pattern became available, including an grey/brown version in Brooklyn Tweed Loft (have purchased the yarn for that) and wondering how it would self-stripe in Noro Kureyon Sock. Or in Schoppell Wolle Zauberball, colourway ' schokocreme' of which you can see a small portion above.

Thing is, the Betty Mouatt Cowl is knit from the outside in, outer edge to centre that is, and finished with a  whole lot of grafting. I am not so opposed to grafting, but I do want the centre of the cowl to be pale and since I cannot calculate how to end up on pale yarn at the very end of the project, I have decided to knit the cowl from the centre out, starting with a provisional cast-on (I'll use Judy's Magic Cast-on). As such I have had to rejig the chart to be upside down, a swatch of which is pictured above, knit on 3mm needles. Not sure whether to go down a size.

Now I just have to decide whether I want to cast on the full 546 stitches for the larger version. Working from the centre out may obviate the need for grafting, but that's a cast-on of 1092 stitches ...
Posted by Amelia at 07:05

Wow! I've just been looking at this one, to do the smaller version, in one color, with some yarn I picked up today.

It doesn't look too open, as is. Did you block it already?

Oh lordy 1000+ stitches? Better you than me! May I suggest lots of stitchmarkers??