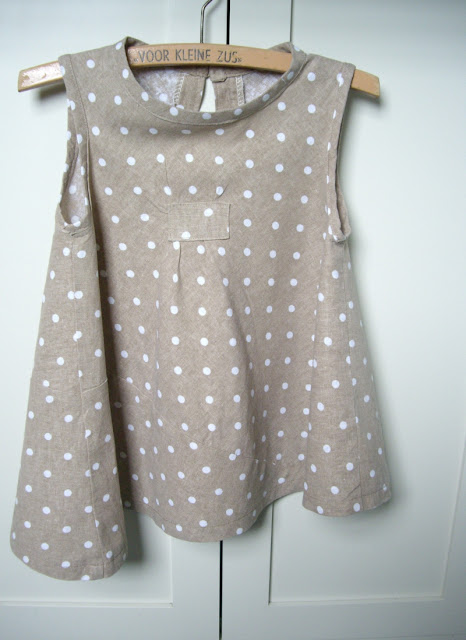 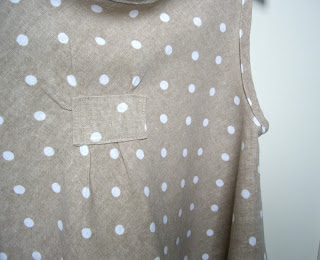 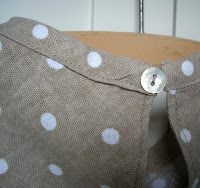 Fabric: Linen/rayon blend salvaged from a White Stag bias-cut skirt (which was great because the fabric was already set on the bias), purchased at the thrift store.
Start to finish: Started sometime after we returned from Savannah in October 2010 and completed on 4 June 2012. 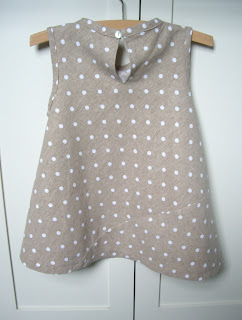 Stash/recycle content: 100 per cent - hooray! Button was from stash.

Comments: Again, it was the bindings that did me in. And the little square patch with some gathers underneath it there on the front. I also couldn't get the opening at the back to lie flat - maybe something to do with the dreaded binding? I also simply made my button loop out of the sewing thread rather than the fabric which i thought would get too bulky and couldn't, um, really be bothered with at this late stage anyway.

Verdict: Very pleased that I actually finished it. The fabric was a great choice for this dress, the colour, the coin spot, the blend.
The front and back are actually cut from two pieces - in the photo of the back you can see the diagonal seam along the bottom corner of the dress. I think that this is design to make the most of the print on the fabric from which the dress is made in the book. It also serves to make the dress asymmetrical but I don't think is necessary if you are not emphasising a feature of the fabric print; that is, I could have cut the back and front in single pieces. I also wonder what might happen to the hang of the dress is that piece were cut on the grain instead.

I have another bias-cut skirt waiting to be up-cycled ....
Posted by Amelia at 08:25

Labels: eco, made by me, nani iro, needle + thread, thrift