the coffee pot theory of creativity 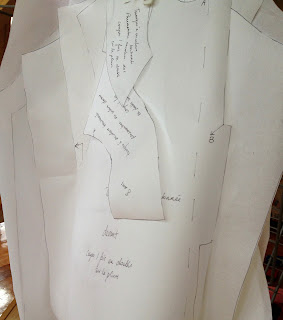 Ah, rather than the crack pot theory. Or maybe it's really a theory about motivation, that it's all bubbling around like coffee in a percolator* until something comes to the top and threatens to spume out in a great cloud of steam unless you do something about it, right now. I am actually serious.

I had one of these moments on Friday evening past - just had to get the patterns that miss bear had chosen  from Intemporels pour enfants: Modèles et patrons de 2 à 8 ans traced off. All eight of them, and the little boy's shirt as well, traced, cut out and collated.

It remains to be seen what the time lag will be on actually cutting the fabric, pinning it together, sewing it up, doing the finishing touches. Stay tuned, grab a cuppa.

* odd metaphor for someone who doesn't drink the stuff but oh well.
Posted by Amelia at 14:27