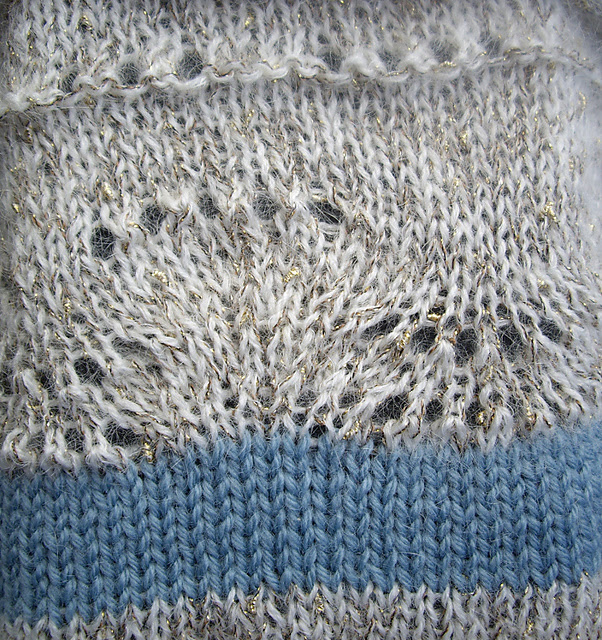 I am still thinking about Whippoorwill and about the Filatura di Crosa Gioiello. I've swatched here with the Gioiello on 3.75mm and then 3.5mm needles and have added in a bit of 'feather and fan' stitch to give it some curve. Then I have switched to Rowan Pure Wool 4ply in 'eau de nil' to test as the contrast. Even though the yarns are listed as the same weight and recommend the same size needle, the Rowan seems much heavier; too heavy perhaps?

The Gioiello certainly blocks out more loosely and I wonder if I were to knit it on 3.25mm needles and the Rowan on 3.5mm or even 3.75mm needles, whether they would balance out a bit. I would also make the first row of the Rowan yarn a garter stitch ridge to firm up the transition.

To knit this would be a bit of a gamble for me. The colour scheme is certainly a departure but I figure that if I am going to keep knitting shawls (which I think I am: ooh, I just bought two skeins of Sanguine Gryphon Skinny Bugga! in Oak Timberworm with which to make Cladonia, but I digress) then I do have to make them a bit different, branch out, try new things. Gioiello and Rowan - will I or won't I?
Posted by Amelia at 01:38

I would so be tempted to pick up the Oak Timberworm and the Cladonia and put this other shawl with it's challenges on the back burner. But that's me and I'm all about the easy right now.

Good luck with your needle experiments :-)