Ok, I have gotten a bit ahead of myself. In the order of things, I'm up to showing how I grafted the live stitches of one segment of the left arm to one segment of the central swirl (the bit that was hidden by that bamboo needle last time). Fact is though, I have done that grafting, and the next grafting. I have rejoined the yarn to the corner of the right arm and knit the first fill-in triangle, and the second, and am now up to the four row border before embarking upon the edging. 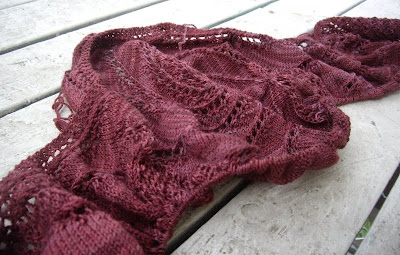 It's hard to tell because it's all squashed up on a circular needle but here are some details: 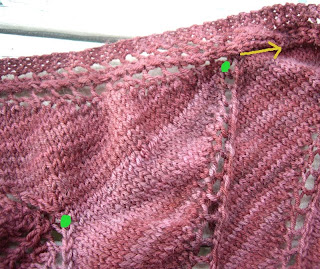 The photo on the right shows the next bit of grafting; once you have attached the border across the top of the swirl you then graft those stitches to the live border stitches on the right arm and graft one segment of the swirl to one segment of the right arm. It's not quite a straight line so I have shown the three points with green dots. I did make a mistake (which I conveniently covered with that uppermost green dot) - the first three stitches should, of course, be grafted as garter stitch and the rest as stocking stitch. I grafted them all as stocking stitch - oh well. 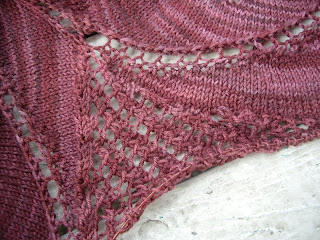 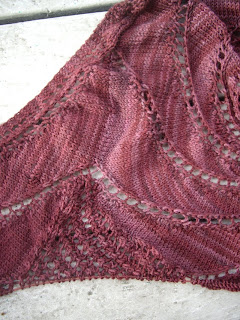 I am not sure if any of this is useful to readers or potential In the Pink knitters. This really may be one of those projects where you figure it out by doing. There is actually an excellent photo on the Ravelry page for the In the Pink pattern that shows all of the steps for joining, albeit on a finished shawl.
Posted by Amelia at 06:21

Labels: in the pink, needle + yarn

Seriously weird construction! Glad it's you, not me. Have a great Christmas :-)