Ah, they were the days of ABC children's television. Infinity Limited where mysteries and dilemmas all had a scientific solution. We used to watch it at primary school. I particularly remember the episodes about the time difference between Adelaide and Melbourne and the case of the missing petrol (wind resistance was the culprit). 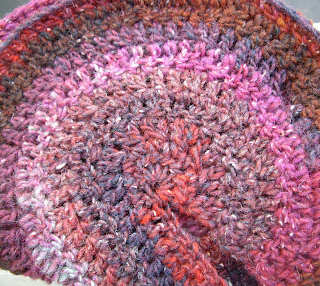 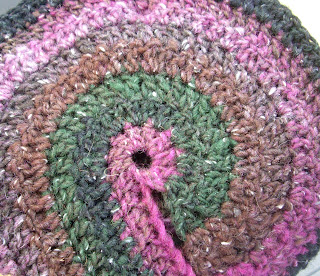 Anyway, I'm considering making the Infinity Wrap by Kristin Omdahl from Interweave Crochet (currently number 16 on my incredible list of almost everything). I originally bought a heap of heavily discounted Noro Kureyon to use but was assailed by a pale minty green streak that just did not work for me. So I'm now considering using the recommended yarn - Plymouth Boku - and have swatched in two different colourways, #5 plum Forest on the left (as used in the magazine) and #11 Rose Between the Thorns. I'm leaning towards the left - any opinions?
Posted by Amelia at 19:15

Just checked out the link and that wrap is so mind blowing it's wonderful! I think the differences in shading of the right sample with the black and green will be more in your face than the subtle shading differences of the left sample which will give you the ebbs and flows without being too light and dark.

Re your reading matter. I found "The Children's Book" unreadable, and AS Byatt has always been one of my favourite authors. I thought it was laboured and impausible - not a fun read. so it could be the book, not you.