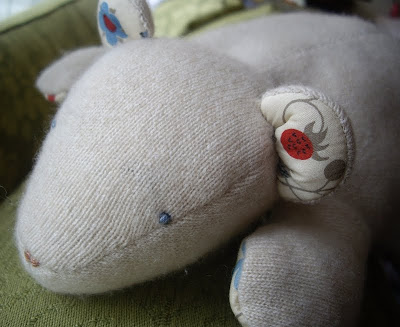 Ahh, speaking of deliveries, a very special little girl has arrived over at Clementine's Shoes. And something that I have been secretly crafting has finally arrived for her (only because I finally sent it, not due to any postal mishaps). 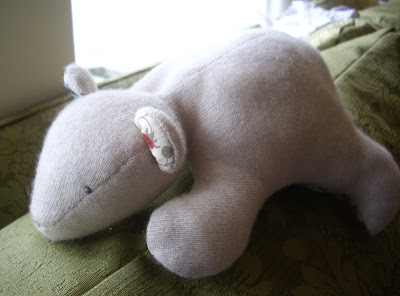 It is with great delight that I present Ours polaire en Liberty et cashmire (Polar bear in Liberty and cashmere); so named in French because the pattern came from a lovely sewing book that I bought in Paris when we were there in 2008.

Having seen so many Japanese craft books, I was curious as to whether there would be anything special on the shelves at a French bookstore. And voila! Astrid le Provost's Intemporels pour bebes: modeles et patrons de 0 a 3 ans (which translates approximately as Classics for Babies: designs and patterns for 0 to 3 years). Beautiful things to sew for babies and children, with the actual multi-sized patterns included (just like the Japanese pattern books). In fact, the patterns and styling in this book remind me very much of the Japanese books, although if these are the French classics then I imagine that the influence is actually the other way around. 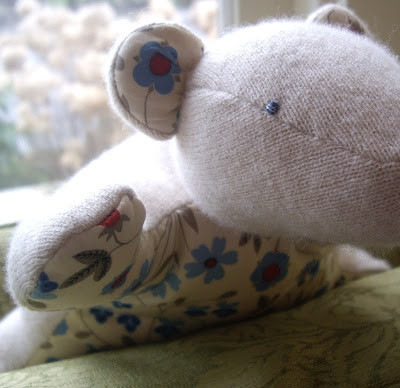 The body of the bear is made from an upcycled Ann Taylor cashmere sleeveless sweater, purchased at a thrift store here in Seattle. The Liberty Tana Lawn was a gift from my dear friend Renee which she gave me as a souvenir from a trip to London. I was careful to place a red flower in one ear and a blue flower in the other - so cute!

The eyes and nose are embroidered with floss that I bought at a thrift store (one bag with dozens of colours, such a find). I wanted to try and match the tones in the fabric for the blue of the eyes and pink/brown of the nose so ended up blending colours by using a couple of different threads held together. Not sure that it was quite successful colourwise but I do like the effect.

The filling is recycled from the contents of a cushion that didn't survive the wash. And all of it is lovingly hand stitched by me. 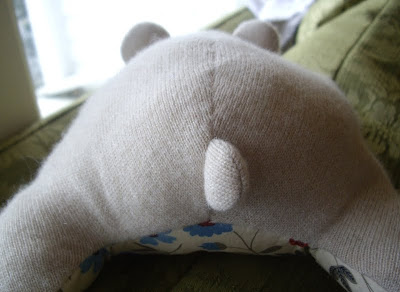 As I hope the photos here attest to, this is a gorgeous pattern. I used to have a picture of a polar bear, taken from behind, pinned up on my cubicle at work (a tasteful picture, fear not) and there was something about that bear's bottom that made me laugh every time I looked at it. This bear is also very cute from behind.

I have two more secret baby craft projects finished - one given away but I didn't manage to take any photos of it, the other yet to be gifted. As if new babies weren't exciting enough, I love making things for them.
Posted by Amelia at 18:58

I am in love with him! I would love to make this for my best friend who is expecting. Do you have a version you could email me? I have searched and searched for the book and they are sold out, and there is not an English version. I am in LOVE with this!! Please help! THANKS!! Brittnee
bchappell21@hotmail.com

I'm looking for a simple polar bear pattern to re-make my son's baby bear as he has loved it so much it is beyond repair after 11 years of companionship. Its on his christmas list and I would really love this pattern if anyone could send it to me. Thx sandiekirkwood@gmail.com