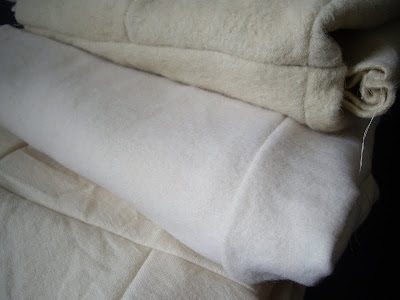 I was having a poke around in my stash yesterday evening when I found a few dozen pre-cut squares and rectangles that I prepared about three years ago in Australia, transported across the Pacific and promptly forgot about. Now that I have a sewing space permanently set up, the temptation was just too great - I started piecing and pinning and sewing. Twenty-four hours later, I have three more waggas to work on (eventually).

Hmm, no idea what I'm talking about? Sorry - last August I finally finished piecing together my version of a wagga, a traditional Australian quilt/rug that was often improvised from suiting samples, hessian and flour sacks. I improvised mine from squares cut from fulled cream-coloured woollen sweaters. Back at the time I was planning to add some other Australian(a) touches to it. I have started on some embroidery, more on that later.
But even longer ago, about three years, when I first had the idea to make a wagga-type blanket, I toyed around with a number of fabric ideas, all recycled clothing from the op shop. What I found yesterday evening and sewed up were a heap of squares from a llama coat and from a couple of woollen blazers. One day I will think of a way to decorate and back them but for now it is infinitely more satisfying to have them sewn up than in piles.
* Wagga Wagga is a town in New South Wales, Australia.
Posted by Amelia at 14:44