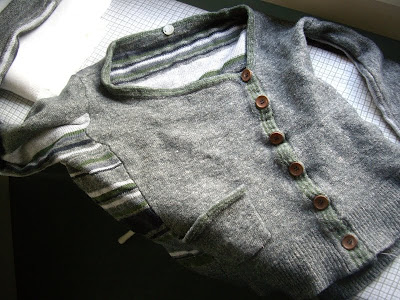 Who knew? Sometimes it's true.

Yes, this is my sadly misshapen Margaret O'Leary (via the thrift store) cardigan. The fibre content is 55 per cent linen 45 per cent flax so I really didn't think that going through the wash would wound it too badly - but it did. The part that has shrunk is the solid grey section; the striped portions are fine. Unfortunately, this distortion makes it a bit difficult to work out exactly how the garment lay previously.

(And actually, upon double checking, the tag just says 'dry cleaning recommended' - maybe I could take it back if I had just kept that Goodwill receipt ...) 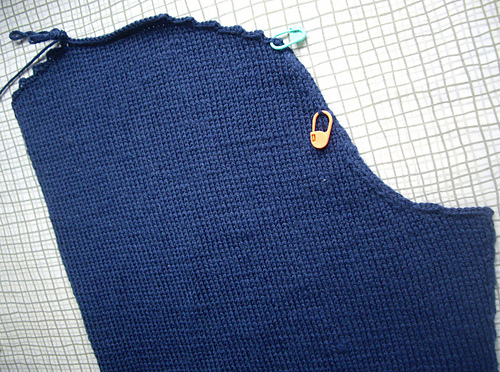 While I am aware that I won't be able to reproduce the cardigan by hand, I do want to try and recreate some of the design features. I particularly like the way that the back of the garment wraps around to the front under the arm so that the 'side' seam is not actually at the underarm but rather level with the shoulder seam. 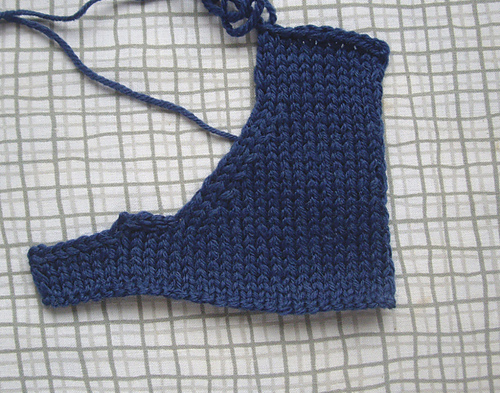 I have had a go at reconstructing the sleeve but got the calculations wrong. What you see here on the right is the sleeve cap of a partial of sleeve. I cast on seven stitches less than called for and proceeded to knit the sleeve with everything above that seven stitches missing. To abbreviate a long story - the gap between the green and orange stitch markers is roughly equivalent to the gap in my calculations.

The solution? To knit a few underarms (like this one at the left) and a few sleeve caps (just the initial decreases) to work out at just what point they match up. Laborious perhaps but I think that it will be worth it.
Posted by Amelia at 09:00

Okay, now I get it. That is a cool cardigan and I like that you are snatching victory from the jaws of defeat and recreating/re-imagining it.

Personally, if it's unusable as is, I'd be cutting it up along the seam lines and using that as a guide for the kind of shaping. Perhaps even try re-drafting a pattern and sewing one. Perhaps I'm becoming a lazy knitter??!
Good luck with it though- looks like a very cute and interesting design.