No, we haven't been travelling, except down to Tenino (rhymes with, umm, wino) just outside Olympia, where we have Shetlands in our own back yard. Shetland sheep that is, and it's the sheep herder's side paddock and ...

Point is, we own a sheep (ok, technically two-thirds of a sheep as part of a mini fibre co-operative organised by a very resourceful knitting friend - thank you Aimee). There are four sheep altogether, the one in the middle is nominally 'ours': 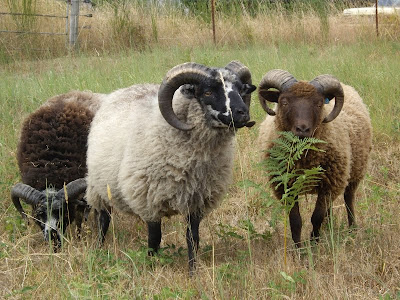 We've all bought into the co-op and will share in the costs and proceeds (proceeds being raw fleece). No idea what I'm going to do with it when the time comes but getting it will be really exciting - we will not be shearing the sheep but instead rooing them! Australians must be good at that.

Below are some up-close photos of the sheep on the left's fleece (he was the only one that we could get hold of and pet). Aimee and I held on to one horn each and I had an awful irrational fear that they would just break off as though made of chalk. Although small, sheep are quite strong when they want to get away from you! 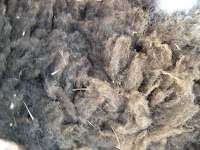 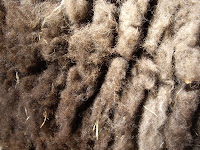 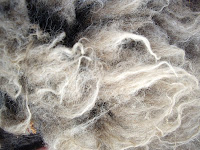