Ahh, corporate speak - stretch targets, personal and professional development plans, key performance indicators. Anyway, on 1 January this year I stated that stretch was one of my goals for 2010, that is, sewing knit fabrics, and promptly forgot about it until I started working on my Alabama projects. I have decided to leave that blue/green tank unfinished and consider it a toile and ditto for the pink (which is from Alabama Stitch Book - I wanted to try it out for comparison, fit- and length-wise). 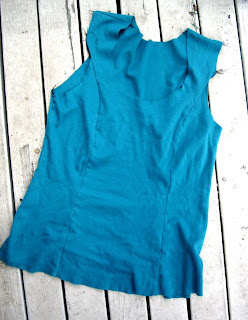 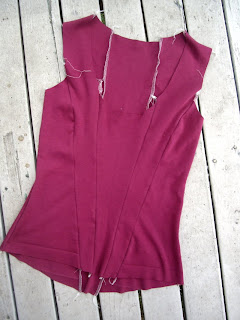 I used my overlocker to sew both of these and wouldn't actually recommend it (although I also wouldn't recommend hand stitching as who could bear to rip out those seams as you work on getting the fit right?) Next time I am just going to use the sewing machine with a very shallow, long zigzag stitch and a little less pressure on the foot than usual.

So what, I wonder, would the key performance indicators for motherhood be? Sometimes we catch up with people whom we haven't seen for a few weeks and they ask what I've been doing. Well, I want to say, both the children are still alive and in one piece and we're all wearing clean undies. I mean, that really is meeting my targets (the first one about keeping the children alive being non-negotiable).

And speaking of clean undies - that is my other recent stretch project. 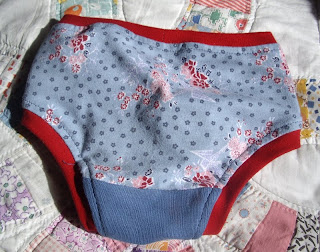 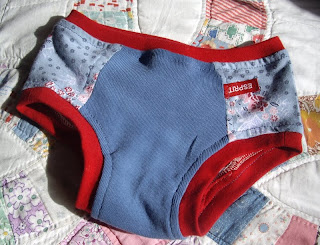 I haven't been happy with any of the girls' underpants on the market here so, having seen Omi Creates' endeavours, I decided to make some. Modern yet modest is how this underpants pattern from that*darn*kat is described and I think that is spot on. And such a fabulous way to use up scraps, old t-shirts, favourite baby clothes - fantastic. You can still see the (admittedly upside-down) Esprit lable on this pair from a top that I bought at an op shop many moons ago. The blue was from a t-shirt of mine that was in decent condition but had a stain right down the front, the red for the bands was some yardage that I had bought previously for something else but decided not to use.

These were mostly sewn on the machine, with the overlocker to neaten up some hems but I question whether that is really necessary. The overlocker is great for knits but the thing is, knits don't really unravel so raw edges are not going to be such a big deal. I actually like to use the overlocker on woven fabrics to keep them from coming apart.

Anyway, I've met my stretch target. Now I just need to go about getting a raise ...
Posted by Amelia at 11:13

Labels: eco, made by me, needle + thread, op shopping

Have you read Sooz's post about sewing with stretch fabrics? I have a link in my side bar I think.
One of the benefits of an overlocker (aka serger) is that the stitching has give, so as the fabric is stretched in wear the stitching doesn't break. If you use a regular sewing machine, you need to use a stitch with give (don't ask me how I know this!) so that the threads don't break when the fabric is stretched. If you're using a regular sewing machine, see if it has some stretch stitches such as a forward and backwards motion straight stitch, or a stepped zig zag. A basic zig zag is a basic option but the others are better.

Those are the cutest panties! Emma has a million pairs otherwise I would be off to make some.