Another secret - secret sewing this time. I wish I were better at showing works in progress rather than foisting miraculously finished projects upon the internet but this time I had no choice. A dear American/New Zealand friend of mine and her Japanese husband are having a baby and, long inspired by the lovely baby quilt that Allison of 6.5sts made for Di at Clementine's Shoes some three years ago, I made a baby quilt. 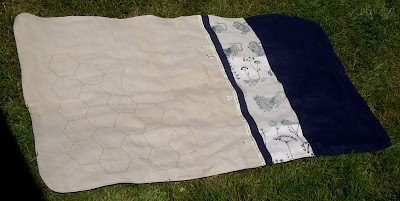 This quilt was made almost entirely from stash; the only new thing is the printed twill tape which was custom printed by lillalotta. Everything else was from stash and upcycled and is significant in one way or another. 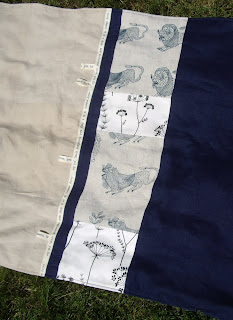 - linen from shirts bought at Value Village in Redmond (where the recipient grew up), dyed with decaffeinated Earl Grey Tea.
- dark blue twill tape, originally the belt from a dress bought at the same VV.
- twill tape with text taken from the Class Book of Geography: adapted to the education code of the colony of Victoria (1894) (that's where I come from).
- beasty-printed linen from a Thomaiy blazer that I bought at the MECWA op shop on Chapel Street in Windsor and lugged across the Pacific with me; I love this print.
- my favourite black and white graphic, a cotton twill also used in my vintage fabrics quilt and to make a child's apron.
- blue linen from the same dress as the dark blue twill tape.

- the batting is one layer of cotton flannelette sheet. 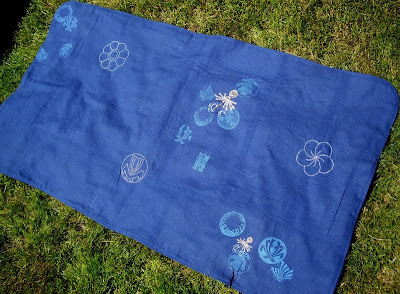 - the back is made from a pair of cotton Japanese pyjamas that I bought at Value Village in Capitol Hill (my local knitting group where I met the recipient). 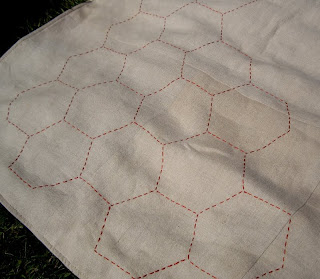 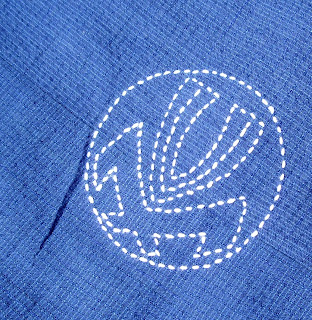 The wonderful sashiko stitching was done by knitting friends Liz (red on the front) and Jen (white on the back). I made the quilt by laying the right sides of the front and backing against each other, adding the layer of batting and sewing around the edge, leaving a 20cm or so gap. then I trimmed the seams, turned the quilt inside out (or right sides out, really), hand stitched the gap closed and top stitched around the edge. The only 'quilting' as such is some stitches on the dark blue twill tape to keep the layers from sliding around too much.

I am delighted with this quilt. It turned out pretty much exactly the way that I had envisioned which is a real treat. Now, I do know another baby who hasn't received a blanket from his mummy yet ... must get onto that.
Posted by Amelia at 13:59

Labels: eco, made by me, needle + thread

The quilt is lovely. It's such a wonderful gift for a new baby. Will be waiting for the quilt you make for your little one :-)

It's absolutely beautiful! I've been enjoying reading about all the pieces too. I can't wait to wrap him up in all the love.

Wow, just when I didn't think I couldn't be more in awe of this, the stories of all of the different pieces makes me love it even more. It's beautiful, the family is so lucky to have it.

amelia!!!! that quilt is STUNNING!!!! you should be proud of yourself and im extremely green with envy of the lucky recipient.
hope all is well you you lots, as is here. marlborough st is just not the same without you :(
xx leah

Beautiful Amelia! Lovely to see that you've pulled so many things together into such a pretty quilt- the inspiration, the fabrics, and the input of other crafters too. A very special project.