The Vital Statistics
Pattern: One-sleeve Wrap by Heather Carlson from Vogue Knitting, Holiday 2007. I think that this is the first thing that I have made from Vogue Knitting.
Size: Small.
Yarn: recycled J Crew 100 per cent wool, same as I used to make my Sunrise Circle Jacket and Columbia Beret. It's about a 10ply/worsted weight so to get super-bulky for this garment I held two strands together.
Needles: 8mm.
Stash/recycle content: 100 per cent - hooray!
Start to finish: 24 May to 15 June 2010.
Comments: Why did I make this, given that it is a garment and yarn weight so very uncharacteristic of me? Maybe that's why. I was sorting through some old files and found the pattern and thought, oh, must make that. Now. So I did. It was great to use up what was left of that J Crew wool and I enjoyed the stocking stitch knitting and awesome cable. You rotate the cable needle 180 degrees before knitting the stitches from it - marvelous. What I really like about this is that it is unusual. So often when new patterns come out it is just same-old, same-old - the same shapes with slightly different stitch patterns, or hems or whatever. What struck me about this design when I first saw it, and why I was so excited about it again, is that it is not the same as everything else out there. 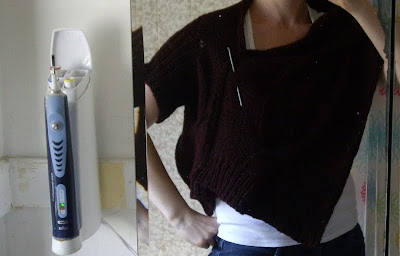 I actually worked this backwards, that is, started at the other end of the stole than that which the pattern indicated to ensure that I didn't run out of yarn. As such my cables are upside down but that's fine. I also worked them at slightly more random intervals. And I worked a row of double crochet along both edges to help it not to roll.

That's my friend Anne modeling again in the top left picture which gives the best idea of the colour and and the cable. And then that's me to the right showing what it looks like from the front when worn in one of those awkward bathroom shots. I've fastened it with a crochet hook because that was all I had to hand.

Verdict: Very happy. This is a great piece and I'm looking forward to some cold weather.
Posted by Amelia at 05:44

Labels: eco, made by me, needle + yarn, one-sleeve wrap

Very pretty! Love the cable too.

Interesting knit. Not sure I could do the one arm thing though, I think I'd feel lopsided!