a knitted veil in peruvian wool

So it turns out that all I was waiting for was some snow because really, that's the best place to take photos of lace. (This snow was not in Seattle but somewhere in the vicinity of Cle Elum where we went sledding.) 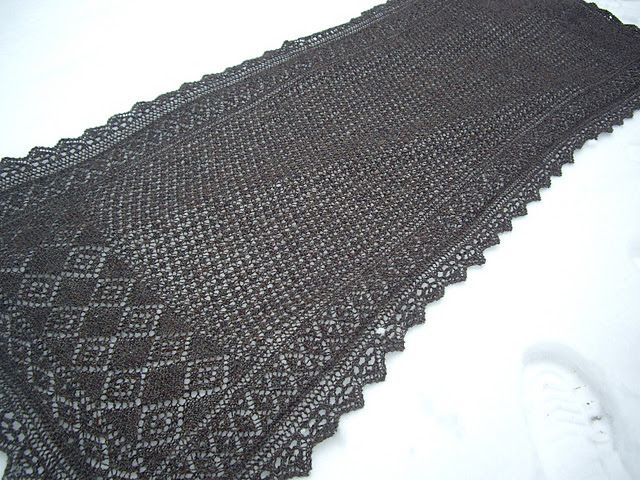 The Vital Statistics
Pattern: A Knitted Veil in Pyrenees Wool by Jane Sowerby from Victorian Lace Today.
Size: I did one extra repeat in the central panel so the final shawl measures 150 x 60 centimetres (60 x 24 inches). 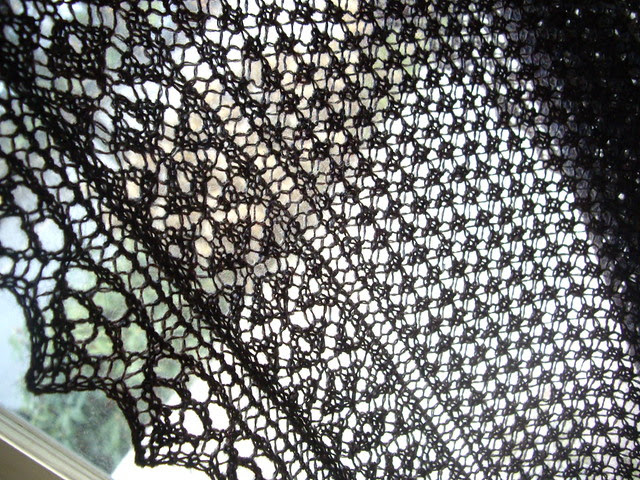 Yarn: Recycled lace-weight yarn, 85 per cent alpaca, 15 per cent wool. This yarn started its life as a heavily cabled long-sleeved dress purchased at Savers in Las Vegas back in December 2008. I also sewed some baby pants from its sleeves.
Needles: 3.5mm.
Start to finish: 30 May 2009 to 13 December 2010 - eighteen months (and a half). I would like to point out that during this period I also started and completed eight hats, four pieces of baby clothing, two adult garments, four shawls, one scarf, one cupcake, two cowls, a pair of mittens, a pincushion, four blanket squares, one pair of baby bootees, a fuzzy little alien and five other small crochet toys. And a baby boy.
Stash/recycle content: 100 per cent! A Peruvian dress that found its way to Vegas and then to the snowy slopes of Washington.

Comments: Wow, where to start? This shawl was a long time in the making and I have written a lot about it previously. I had the most trouble with knitting that central panel -nine repeats of 3 rows, keeping track of a four-row lace pattern and an 18 row border pattern simultaneously. Once I got rid of the stitch markers and just 'read' the knitting it went much better. The rest of it was actually fairly easy knitting, just following those charts. The entire shawl is knit from just two strands of yarn, one for the body and one for the edging, a great advantage of using recycled yarn. I learnt new skills - particularly that knitted-on edging - and refined old ones - perseverance.
Verdict: Triumphant, absolutely triumphant. I don't think that I'm going to rush to make another one (although I will yet finish my Faux Prussian Stole) because that central stretch was mind numbing but I am going to love wearing this and feeling triumphant.
Posted by Amelia at 05:01

Labels: eco, knitted veil, made by me, thrift

It's gorgeous, simply stunning. That's an epic piece of work, you should be well proud of it :-)
Definitely a triumph since it has been completed over a period of time which included late pregnancy and early infancy. Wow!!!!!