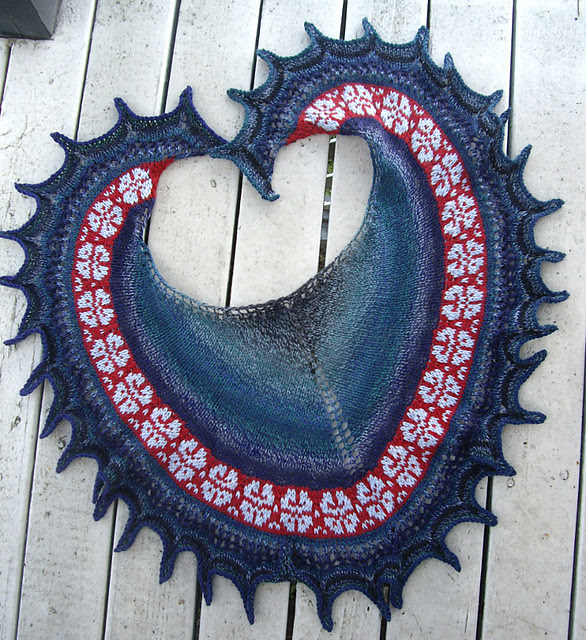 The Vital Statistics
Pattern: Kerchief by Kieran Foley of knit/lab. This designer has lots of other lovely patterns - I hope to knit something more from him soon.
Size: One size - depth at centre is approximately 36 centimetres/15 inches.
Yarn: Schoppell-Wolle Crazy Zauberball in colourway 'U-boot' (which means submarine), 0.6 skeins; Rowan Pure Wool 4ply in colourways 'Kiss' and 'Clay', 0.2 skeins each. I really love the Zauberball and this colourway particularly and will certainly use it again.

Actually, it strikes me that the colour story in this piece is similar to my Daybreak shawl. Oooh, but a note - the Zauberball lost dye when I soaked the piece for blocking and it tinted the Clay which was actually a lighter grey. All to good end I think, it fits in better now to the colour scheme but certainly something to be aware of.

Needles: 4mm.
Stash/recycle content: none whatsoever.
Start to finish: 20 December to 25 December 2010 - wow, look what I can achieve when the mood takes me!

Comments: I came across this pattern on Ravelry on 2 December. Exactly three weeks later I was wearing it out to Christmas dinner. As soon as I saw it, I desperately wanted it. I bought the exact yarns and colourways that the pattern indicated, I attempted stranded colourwork for the first time in my life, I knit it in six days!

Given how much bulk there is to the colourwork band compared to the Zauberball sections, I'm not convinced that it might not be smarter to just knit a red band and then do some duplicate stitch ...

Verdict: Wonderful, if not a little small. I wish that it was twice the size and did consider making it larger but then decided to stick with the pattern for my first foray into colourwork. In that respect, I'm glad I did. Doing the colourwork was ok but I wouldn't say that I'm a convert - the idea of an entire garment makes me blanch but maybe a hat or some mittens sometime. If it is a small element of a future project, I won't hesitate.
Posted by Amelia at 10:12

Labels: kerchief, made by me, needle + yarn

It's a heart! Well that's what I saw on the screen as it popped up anyway! Yay you, 5 days for a shawl, geez talk about crazy :-)