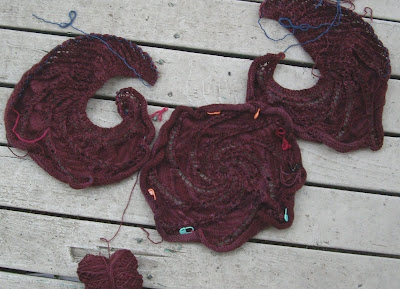 That mesmerising central swirl and the unique construction were what particularly grabbed me about In the Pink. Still off on my knitting tangent, I completed the second arm/crescent/wing, whatever you like to call it. I also had a look on Ravelry at a knit-along discussion of the joining process and it appears to be as complicated as I had feared! Very good reason to put this aside again.

Pictured here are the two arms and the central swirl, laid out in the formation in which they will be joined together. The pieces have not yet been blocked so are all a bit rumpled but I think that it is going to be wonderful (one day).
Posted by Amelia at 07:18

Labels: in the pink, needle + yarn

It's an amazing piece, isn't it? I think for now I will be content to sit back and watch your progress! (I love the color you've chosen.)

That looks truly weird! Can't wait to see it all stuck together. Amazing the way some people's brains work and they have these ideas and make them happen. Totally in awe of the design.

Do you have the link for the KAL?